We’re going luxury with this one! Named after one of the world’s leading fashion designers, the Tom Ford strain, sometimes referred to as Tom Ford Kush, Tom Ford Pink TFPK for short, or its more ominous name, Tom Ford Pink Death, this indica heavy strain is the exotic celebrity child of two Canadian indica legends, Pink Kush and Death Bubba. Tom Ford Pink Death is known for its high THC content which allows it to offer an ultra relaxing, long lasting high, making it a sought after strain within the medical cannabis community and indica lovers alike. With its blend of sweet citrus and fresh woody flavours and an equally mesmerizing colourful, frosty appearance, this is an all around stunning strain with amazing, potent effects!

The effects of Tom Ford can be felt almost immediately upon smoking as a wave of calmness washes over you mentally. Any negative thoughts or worries will soon quickly be forgotten, or at least pushed to the back of your mind as a peaceful haze overcomes you and takes their spot. This stoney head high will then spread throughout your body and limbs, putting you into a state of utter relaxation. The high with this strain is so potent that it can be considered sedative so is best suited for night time usage and indoors as you will eventually be wanting to get some shut eye and snooze off into a deep, restful sleep. Its calming effects can be used to treat chronic pains, depression, stress and anxiety, as well as insomnia, so it is a perfect strain to treat yourself at the end of a long and hard day. Forget all of your stress and melt away into the bliss of Tom Ford!

There are no reviews yet.

Be the first to review “Tom Ford Kief” Cancel reply 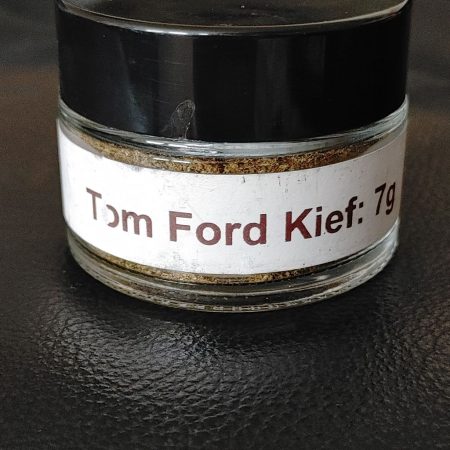